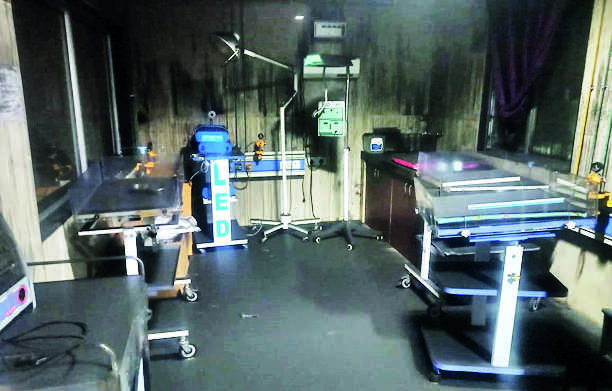 Bhandara: Ten premature babies died — three to four of them charred — after a fire broke out in the Sick Newborn Care Unit (SNCU) of the District General Hospital here, about 60km from Nagpur, between 1.30am and 2am on Saturday. The victims included eight girls and two boys. Seven premature babies, all girls, were rescued.

All the babies were yet to be named as they had been in special care since birth. Authorities knew names of the mothers of nine out of 10 victims. One name is missing as the child had been abandoned at birth. The rescued babies, including twin girls, were shifted to other units of the hospital.

Maha orders audit of other hospitals’ childcare units
The victims were all in the ‘outborn’ section of the hospital, where those born in other hospitals but in need of special care are admitted. After the fire, a Covid patient admitted in he hospital was shifted to the Government Medical College and Hospital in Nagpur where he was declared brought dead, said a relative.

Bhandara district civil surgeon Dr Pramod Khandate told TOI that most died as oxygen supply snapped due to the fire while three to four were charred to death. The cause of the fire is not known but is believed to have been caused by a short circuit.

The Maharashtra government has ordered a high-level inquiry by a six-member committee into the accident. The committee will have to submit a report to the government within three days.

“Strict action will be taken against the guilty after a thorough probe,” said CM Uddhav Thackeray. He also announced a compensation of Rs 5 lakh to the kin of the deceased. The National Commission for Protection of Child Rights (NCPCR) has asked Bhandara district collector Sandip Kadam to send the factual action taken report within 48 hours of receiving the letter.

Fire tenders reached the spot within 10 minutes after being informed and doused the flames within 30 minutes. According to Kalgun Gopala Wadhai, fire maintenance incharge of Bhandara Municipal Council, the fire fighters could not find easy access to the special ward and had to use ladders and break open the windows to gain entry.

Bodies of the victims were handed over to aggrieved parents but the media was barred from talking to them. TOI contacted a few in their villages while authorities refused to answer queries.

Deputy CM Ajit Pawar has ordered an audit of child care units of other hospitals in the state immediately. State home minister Anil Deshmukh too ordered a police inquiry into the accident. According to the chief fire officer of Nagpur and PWD officials, the fire wouldn’t have spread to such an extent had anyone been present in the ward. Former state energy minister and BJP functionary Chandrashekhar Bawankule claimed that no action was taken even after relatives of the infants had complained about power fluctuations in the ward over the last week.