“In six to eight hours, we completed the transfers,” said BMC additional municipal commissioner Suresh Kakani. The supply in the city was disrupted for a few days due to a mishap in one of the plants.

‘Hospitals should limit indiscriminate O 2 use’

As we didn’t want anything untoward to happen due to depleting levels of oxygen at these hospitals, we decided to move some patients to bigger centres as a precautionary measure,” said Kakani. The city needs 235 metric tonne of oxygen a day for patient care.

The oxygen situation is so precarious the BMC has started pushing hospitals to use it rationally. The state’s Covid task force has already asked doctors to use ventilation mechanisms that use less oxygen.

“Giving oxygen to a patient who doesn’t need it, too, can harm him or her. We have to decide who will benefit,” said a doctor who was a part of the BMC’s virtual training programme on Saturday for hospitals on rational use of oxygen.
Kakani said hospitals cannot wait until the last minute to announce they are short on oxygen. “Calling one or two hours before the supply runs out won’t help. Hospitals have to quantify their requirements over days and tie up with multiple supply agencies so that they have a backup plan,” he said.

Patients from Bandra’s Bhabha Hospital were moved in batches from Friday night itself. A senior medical officer from HWest Ward said 25 out of the 35 patients moved were on oxygen support and the rest on bipap support. “They were shifted as a precautionary measure as oxygen was almost on the verge of depletion in the hospital,” said BMC H-West Ward medical officer Dr Sanjay Funde. The patients were shifted to BKC and Dahisar facilities and Rajawadi.

Bandra corporator Asif Zakeria said it was a trying experience for patients who needed cardiac ambulance for the transfer. Some others who were critical were not shifted until later as the authorities feared the movement would affect them. “Bhabha is one of the largest public hospitals and if that is running out of oxygen too, it is a matter of concern,” said Zakeria.

From Shatabdi Hospital, Govandi, 44 patients were moved. Ward M-East’s medical officer Dr Alka Mane said the patients were moved to the Mulund Covid centre, Rajawadi and BKC.
Mumbai mayor Kishori Pednekar, who visited various civic hospitals, directed the municipal administration to set up a liquid oxygen plant in its hospitals to find a permanent solution to shortages. She directed an oxygen plant be set up at Shatabdi and Bhagwati start.

In Ghatkopar, BJP MLA Parag Shah said, “Some hospitals such as Zynova and Hindu Mahasabha are running out of oxygen.” Shah said those who want to get tested are not getting an appointment, those who get tested are not getting reports on time, if a person is positive, there are no beds, if they get a bed, there is no oxygen, and if one dies, there is a queue for cremation. 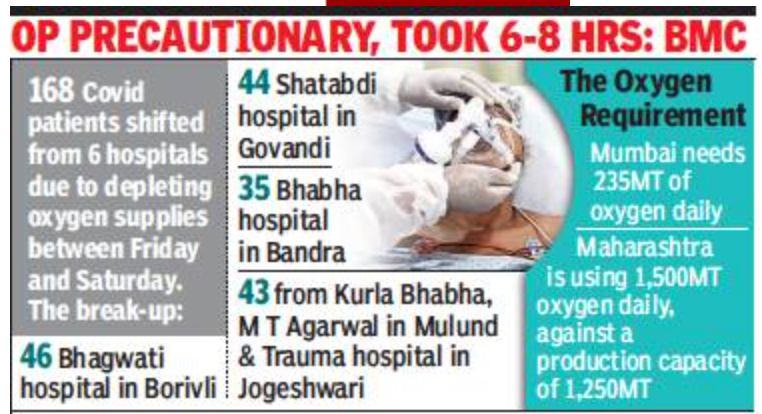