Ahmedabad: As doctors face the distressing duty of telling Covid patients’ kin that ICU-ventilator beds are not available, the relatives are braving extraordinary struggles to organize the lifesaving machines on their own.

It is stupendously difficult for common people to get such specialized equipment, but the despair-powered hunt gives the only chance to save their seriously ill kin. The benevolence of strangers is coming as life support, literally, as most machines are lent by unrelated people to ward off human tragedies.

Manish Patel, an Ahmedabad resident, undertook the tortuous journey of managing medicines, oxygen, buying a BiPAP machine, and finally borrowing a ventilator to ensure the survival of his wife’s brother, Pawan Patel. Pawan is only 26.
“I decided to fight hard for his life. For four days, I queued up for oxygen cylinders,” says Manish. “When his saturation dipped further, I bought a BiPAP machine and planned one step farther by calling all friends and acquaintances to organize a ventilator.”

The Patels found a bed at a city-based heart hospital but all their machines were serving patients. “I promptly got a ventilator from my friend’s house who had bought it for his father’s critical care,” Manish says.

The ventilator has been put on standby as Pawan’s condition has stabilized. Manish says he is ready to lend the BiPAP machine to anyone in need.

Experts say as a thumb rule, out of 100 admitted patients of Covid-19, 20 would require ICU and out of 20, 8 would require ventilator. “But during this wave, the number is more than 25% for ICU requirements and 8 to10% of that number for ventilators. With exponential rise in cases, the numbers have also skyrocketed,” said a senior pulmonologist based in Ahmedabad. “Oxygen beds can be arranged or prepared with some efforts, but it’s really difficult to get an ICU or ventilator bed. The reason is also the relatively longer stay of the patients. For Ahmedabad, the figure hovers around 7 to 10 days.” Thus, the first instinct of the caregiving doctors is to prevent the patients from going on ventilator, as even today the mortality rate is as high as 40-50% for the patients on ventilators in the city, said experts.
Kind hearts step forward to donate, loan ventilators

Hospital administrators say that citizens are investing their full might into the war against Covid. “In four instances, patients brought ventilators to the hospital when all our machines were occupied,” says a hospital chief. “Once a hospital ventilator is available, we put a patient on it. But the gritty effort people are demonstrating now to save lives is unparalleled.”

Strangers are helping in kin in distress. Mumbai-based Bijoy Balappan says a good Samaritan loaned him ventilator for his 73-year-old father, T S Balappan who developed lung complications though his RT-PCR test was negative. His father, an Amdavadi, is the general secretary of Asia Charitable Trust and hundreds of people in his network stuck to their phones to get him an ambulance, find a hospital, and later secure a ventilator.

“My father’s condition has stabilized and we will return the life-saving machine shortly. I thank God for this miracle.”

In another case, a paramedic from a village brought a ventilator with a critically ill patient after getting it sanctioned from a local hospital.

Dr Bharat Gadhvi, the president of Ahmedabad Hospitals & Nursing Homes Association (AHNA), said that ventilator beds have been extremely scarce. “We have seen patients getting ventilators which may not be of great quality,” Dr Gadhvi says.

“We have also seen people offering to donate ventilators if we assure them that their referred patients will get two beds. Of course, we cannot accept donations on such terms.” 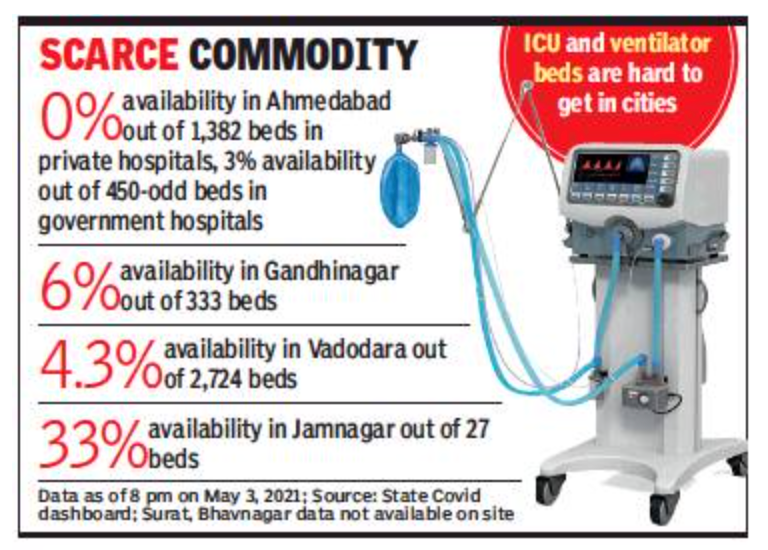